Hontour Season 3 was long-awaited resurrection of the HoN competitive scene. After the 2nd season, without the announcement of Dreamhack Summer 2014 and only with Carnage in Caldavar league going on, the scene was stagnating, which resulted to only 8 teams being in the Diamond Division, compared to 16 in previous 2 installments. However, with community funding via U.R.S.A. avatars, the prizepool increase inflamed the competitive fire once again, with many teams reforming or beginning to practice more. Over 8 seasons, hundreds of teams battled out for not only money, but also points, which in the end resulted in invites for the Hontour Season 3 World Finals LAN in Bangkok, Thailand. The official casters for this season were BreakyCPK and MiniMaggot.

3rd season of Hontour began with 2 favorite teams coming into it: Bad Monkey Gaming and Sync esports. After Sync's relatively unexpected victory, BMG disbanded and most of the players left. That left the top spots open for new teams, which resulted in the rise of Willowkeeper as the new #2 team, but also new teams like Nullstone Gaming, Night Raid or new Bad Monkey Gaming stepping up.

This Cycle resulted in an expected finals between Sync esports, which recently replaced Support by Insania and Bad Monkey Gaming, which had to replace Limmp and FUzi by Superkge and Xibbe. Sync prevailed and became the first team other than Trademark eSports, Stay Green and LIONs to win a Hontour Cycle.

With original BMG out of the way, Sync wins 2nd cycle with relative ease. A newcoming team in Nullstone Gaming coming from Gold division takes home 3rd place, becoming the America's only team in Diamond division, since The Last of US dropped to Gold last Cycle.

Last Cycle almost repeats itself, only this time with two American teams. Sync esports gets a clean run once again, although they lose the first game of finals against tree's level 1 kongor strategy with 3 unorthodox hero picks. They are on a good way to break the "No team ever won 4 consecutive Cycle victories" statement.

A much needed disappointment for the good of the scene finally appeared, as BMG managed to upset the reigning champions. Other than that, The Last of US reformed as Night Raid and a new team Dawn appeared, which would later form into team Fresh, and they already knocked down tree into Loser's bracket, finally ending at 3rd place. Somewhat shockingly, that leaves Reason Gaming to play Willowkeeper, last Cycle's runner-ups in the first round of Loser's bracket, to lose and fall down to Gold Division.

The Cycle starts off with upsets, as the Gold Division was strong last cycle (with Reason Gaming not even moving on). Previous Cycle winners lose to Shrek is Love, a team coming from Gold Division and the previous cycle 3rd-placers lose in Loser's bracket to the second team from Gold division. Nullstone Gaming manages to turn a long game and take a game off Sync esports, getting confidence and beating Willowkeeper soon after, only to be beaten 3-0 in the finals.

And everything is back to normal, Reason Gaming is present again and we have the old tree vs Sync finals. However, BMG, as the first Diamond League winner ever, falls to Gold Division and disbands right after due to internal problems. A half-BMG-half-new team forms back not to lose the points generated so far.

As Reason Gaming promised 2-3 Cycles ago, they began taking it seriously and practicing way more than they were before. It finally pays off, as we see them beating tree, their "rivals" and also taking 2 games off Sync (who became more vulnerable than ever, even throwing a game to Ride my Rocket, as their lack of practice and rumoured department after World Finals becomes apparent).

The quickly reformed Bad Monkey Gaming fails to stay in Diamond Division and disbands for good. Reason Gaming finally becomes confident in having the upper hand over willowkeeper and gets to finals once again, however Sync seems to be back in shape, ready for the World Finals, sweeps it's opposition with clean score and breaks the 4 consecutive Cycle victories record, just to be regarded as the clear favorites.

The #1 team got direct invite into World Finals. The other teams from top 13 had to battle it out for only one spot. The main favorites were Willowkeeper, Reason Gaming, Fresh and Nullstone Gaming, but teams like Night Raid or Shrek is love were a tough competition as well. Prime Icarus became Team Who and REXXARS disbanded. 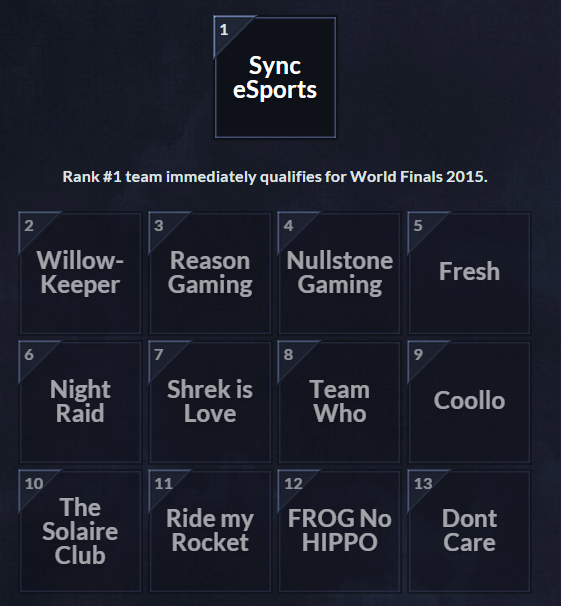 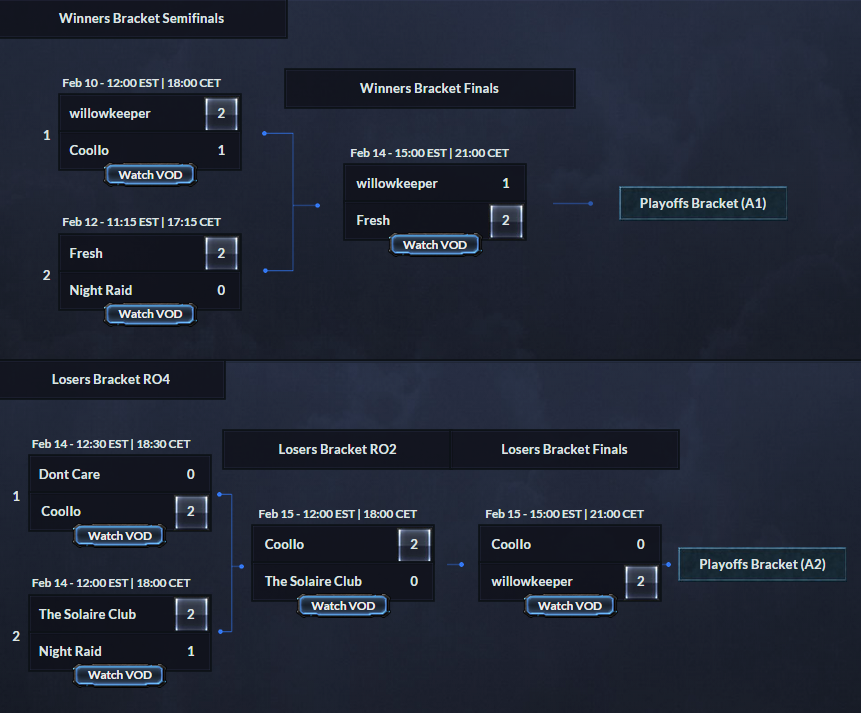 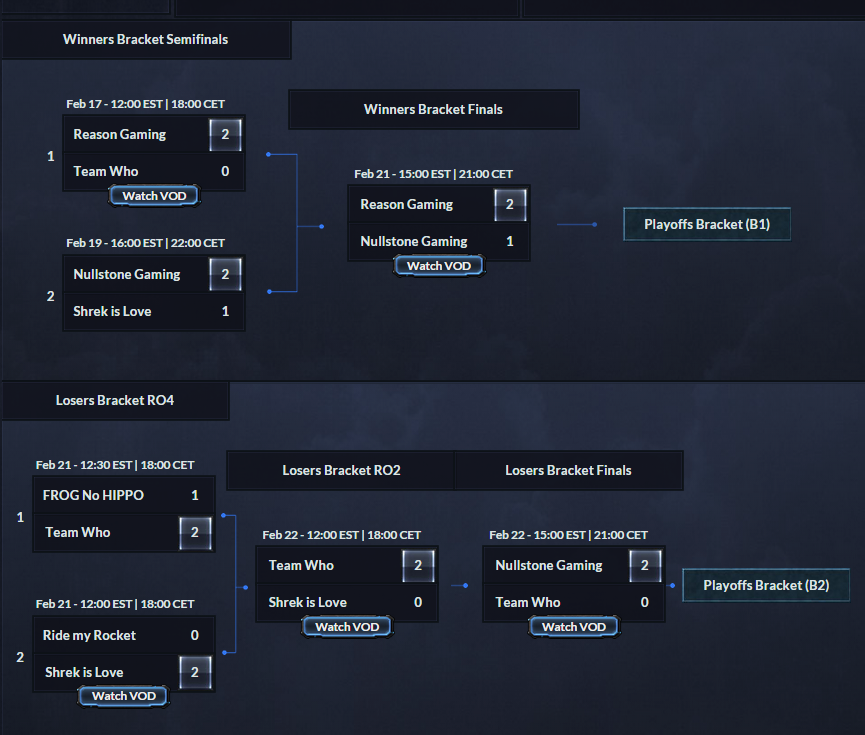 With Willowkeeper being invited to the Grand Finals, they got picked up by Bad Monkey Gaming, as their 4th new roster during HTS3. Cats Gaming were the team to represent CIS region and World Elite was to represent China, as the first team ever. Other slots were filled by Thai teams, most notably Neolution.MRR and Acer Dogg. 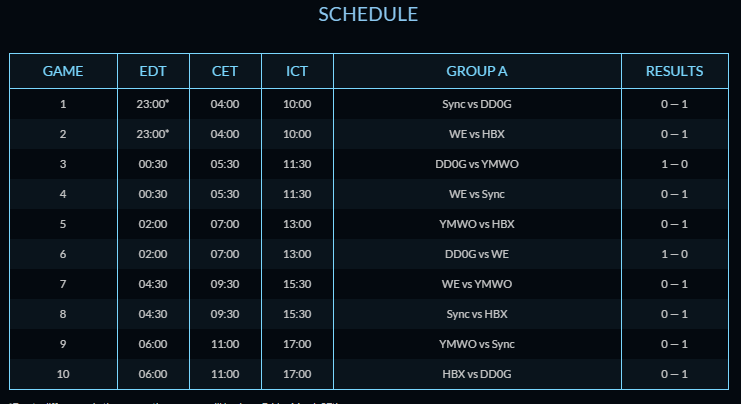 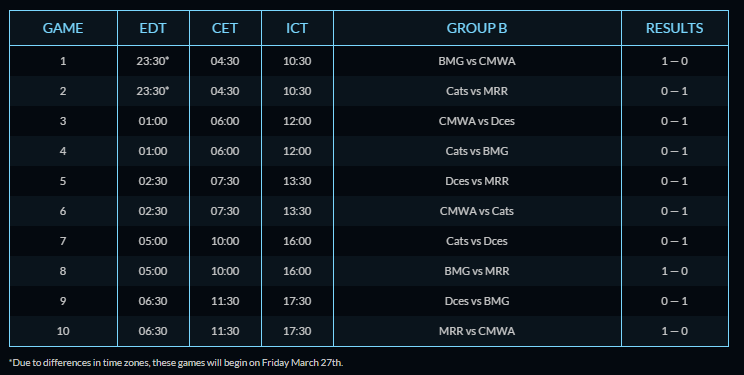 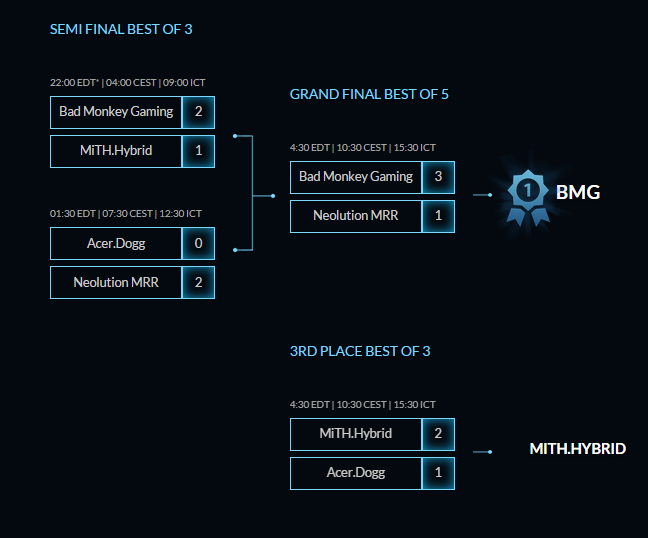 Many people considered Sync esports as the clear favorites and expected them to sweep the finals and leave HoN while on the top. However, they didn't do either. Bad Monkey Gaming managed to keep the Hontour crown in NA/EU hands, however, soon after winning, they released Kracke from the roster (in exchange for Mightymarcus). Most other teams undergone changes as well and many new teams appeared in hopes of off-season success. The Chinese scene, as many people expected, is still way behind and needs a lot of time to be able to even compete with other regions. CIS scene still seems to be behind, however Thai scene is catching up and slowly becomes a serious threat for NA/EU teams.